r Andrew was raised in Papillion, Nebraska, and has attended Midlands for most of his life.   In December of 2007, through the ministry of Midlands, he came to trust in Christ as his Saviour.  It has been his desire to serve the Lord in ministry since that time.

Shortly after his salvation, the Lord led Pastor Andrew to Heartland Baptist Bible College in Oklahoma City, where he graduated with a Bachelor’s Degree in Biblical Studies.  He also met his wife, Amanda, while attending this school.  He and Amanda enjoy parenting their four children, Peter, Amelia, Emma, and Luke and serving the Lord together at Midlands.  Andrew has been on staff as the Associate Pastor of Midlands since May of 2013.  In February of 2019, the church voted to call Andrew to serve as the next pastor upon Pastor Lydick’s retirement.  The pastoral transition took place on June 2, 2019 and God has continued to move the church forward under Pastor Andrew’s leadership.

Mick Huntley was born on May 2, 1990, in Omaha, Nebraska.  He grew up in Bellevue, Nebraska, right across the street from Midlands Bible Baptist Church.  In the spring of 2013, after graduating from the University of Nebraska Lincoln with a Bachelor’s Degree in Music Education, Mick started attending Midlands regularly.  In the summer of 2015, Mick realized that he wasn’t saved and came to trust in Christ as his Saviour.  After getting his salvation settled, Mick felt called to the ministry and began waiting on the Lord for Him to open that door.  God opened that door in the spring of 2018 when Mick was given the opportunity to come on staff at Midlands.  He has been serving as the Associate Pastor since June of 2019.

Mick and his wife Abby were married January 3, 2015, and have four children:  Jane, Charlotte, Elleanor, and George.  Mick and Abby work together in the Teen Class and Junior Church.  Mick also serves as the music director.

Caleb Breece was born on May 20, 1999 in Sioux City, Iowa.  He grew up in a Christian home with godly parents, and trusted Christ as His Saviour in July of 2010.  After graduation from high school in 2017, Caleb felt the Lord calling him to preach, and he enrolled at Heartland Baptist Bible College in Oklahoma City to gain further education and training for the ministry.  He graduated in 2021 with a Bachelor’s degree in Biblical Studies.

David H. Lydick was physically born on November 11, 1948, in Wichita, Kansas, and spiritually born-again on June 9, 1957, in the same city.  After graduating from Baptist Bible College in Springfield, Missouri, he and his wife, Sandy, came to Bellevue in June, 1978, to establish an independent, fundamental Baptist church.  Bro. Lydick pastored Midlands Bible Baptist Church faithfully for 41 years.  His retirement ceremony took place on June 2, 2019, at which time Bro. Andrew Diorio transitioned from Associate Pastor to become the pastor. 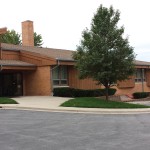